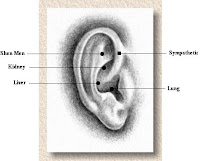 You can easily integrate this into your general massage sessions when massaging the ear. If you choose to do point massage and acupressure pellets, it’s wise to spend some time educating your patient regarding the more specific nature of this technique.
Posted by Michael Vahila, LAC, LMT at 4:32 PM

I spend a good deal of my time educating people about therapies that are not well known in America. Even though acupuncture gets plenty of good press, there are many other sub categories related to acupuncture that are obscure, yet very effective. You can see my previous post on Auricular Therapy (January 2009) for a brief look at that specialty.

There are many effective protocols for treating pain and Dr. Niemtzow has created a simple way to address this issue without the need for extensive training.

Dr. Niemtzow was kind enough to share the details of this protocol with me. I’ll summarize it here. Those of you trained in auricular therapy can experiment to see how it works for you. Even though his technique uses semi-permanent needles, similar results can be achieved with electro stim, point massage and acupressure pellets. 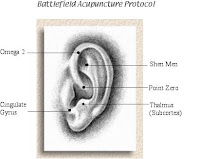 Here is a chart locating the 5 points used in this protocol.

Start with the Cingulate Gyrus. I would suggest starting on the side where the pain is located or the dominate ear if it the pain is in the midline or bilateral. You can use electro stim or point massage and then place an acupressure pellet on it. Have the patient walk around for 2 minutes and evaluate the level of relief.

If there is still some pain, stimulate the Cingulate Gyrus on the other ear and again let the patient move around a few minutes and reevaluate.

Determine which ear seemed to give the most relief, then treat the other points on that ear in this order: Thalamus, Omega 2, Point Zero, Shen Men. If there is still some pain, you can treat the other ear in the same fashion.

I consider auricular treatment to only be a part of my approach. It often reduces pain considerably making more direct reatment with massage or other modailties more comfortable and more effective.

Dr. Niemtzow says that relief may last from minutes to months, depending on various factors. If people expect 100% permanent relief from any treatment they will be disappointed. As a component of a multifaceted treatment however, auricular therapy is a powerful tool.

The advantage of this protocl is the short learning curve and general effectiveness, the disadvantage is it may not be specific enough for some situations. As such, it may not replace an approach based on corresponding points or 5 element points. Just consider it another option for your patients. And, of course, do other appropriate treatment within your scope of practice.

My thanks to Dr. Niemtzow for his service to our country and for bringing a powerful pain relief modality to our soldiers.
Posted by Michael Vahila, LAC, LMT at 5:29 PM